TR7 Chassis Numbers and what they mean

Because Triumph used a variety of different chassis numbering systems this page attempts to explain what each letter should mean – while this will be correct for the vast majority of cars you should note that it is not unusual to find cars with the wrong lettering and designation such as TCG and ACW cars which are FHC’s also having some DHC models in amongst as well – why? who knows other than all sorts of strange things happened at BL during the 70’s and 80’s.

Note Contrary to opinions these cars actually do exist. *Some early convertibles have this chassis number 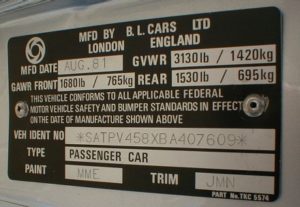