It’s taken me a couple of months to get back to this masterwork on one of the least known objects on the mid-range TR7’s, the Solex Fully Automatic Starting Device , or FASD for short. Almost all of the rest of you call it an automatic choke, naw baby naw, it’s much more than a choke, it’s a gizmo! 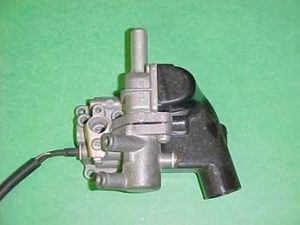 A choke physically blocks off airflow through the carb to give a richer fuel/air mix since cold engines don’t vaporize fuel well. In our beloved Triumphs only Zenith-Strombergs really have chokes since the SUs pull down the jet pipe to create a richer mixture on start-up (not quite a choke action, but it works). In the ZS carbs (such as the CD175’s found on latter TR4s through TR6s) pulling out the choke rotates a bar into the air flow, lifting up the air piston which raises the jet (richer fuel air mixture) while restricting the airflow (lower air pressure across the jet orifice leading to more fuel sucked out which also increases the richness). Both of these actions working together get your car started when it’s cold.

As I’ll explain in a little bit the FASD is a separate carb in it’s own right stuck on the side of a ZU that has no internal choke. But why did BL need to throw away the manual choke anyway? Pollution control would be my bet. You’ll get better burn control over the entire engine heat range leading to better emissions figures. Okay, so why the FASD rather than an autochoke so common on other cars since the 1950’s? You got me. I think it had to do with trying to modify the ZU carbs to accept either an electric choke or hot air choke, or maybe trying to get the autochokes on two carbs work together? Now, it seems to be that the electric choke is easy enough (such as Weber did), but I probably don’t see the “big picture”. Anyway it happened, ZU took the chokes off their carbs and modified the internal gas routing such that they could bolt an FASD on the side. This gave them their air pollution numbers, and us something that requires air, cooling fluid, gas, and (get this) an electric heating element to operate!

So where is this contraption located?

Picture Of TR7 Engine With FASD Pointed Out

Yes, I know it’s hard to pick it out in that pile of tubes, wires, and everything-that-doesn’t-look-like-a-TR3. And trust me, getting it off the car is interesting.

Since I had to remove one in the course of writing this article, I thought it would be instructive to write down the removal steps.

2. Take off the air filter box all the way. Heave it to the side.

4. Disconnect about every damn tube, wire, hose, and everything else on the right side of the engine.

5. Pull the front carb off, take it to the workbench, calm down, have a beer.

You will note that none of these steps are in the workshop manual, in fact, the FASD isn’t really mentioned. That’s why I’m here!

Okay, so what is this thing?

Let’s play operation! Once you’ve completed the religious experience of getting it off, you’ll see this sitting on your workbench:

1. Air From The Filter Box

5. Where It Bolts To Front Carb

Okay, so it’s not the best artwork, but what do you expect for free?

I suppose you want to know how it works. This is obvious to even the most casual observer! Since both the air and fuel valves are open, air and fuel will be sucked in at startup. This mixture is much richer than what’s coming from the carbs and provides the extra fuel to start a cold car. The electric heater (my guess) is to assist the fuel vaporization.

When the engine warms up the FASD shifts off like thus:

Gotta love hand-drawn diagrams in this era of computer graphics! Anyway, the function is rather simple. The thermostat heats up with the coolant and forces both the fuel and air valves closed, cutting off the “choke” function. That’s it. Very simple.

So if it’s so simple, what goes wrong?

If you think your FASD isn’t working, the symptoms of which are either impossible starting when cold (ain’t working), or idles way to fast when hot (ain’t shutting off), then the first things to check before yanking it apart are all the fuel, air, water and electrical connections. If those check out, then it’s time to check the most probable culprit…

The usual thing that goes wrong with the gizmo is that the thermostat screws up. This either is due to build up in the thermostat chamber keeping water from flowing, or more likely, the wax bulb inside the thermostat is on the fritz. Good news, bad news, the fix is usually replacing just the thermostat, but the bad news is it’s no longer stocked. Now you know why I took the carbs off the yellow TR7, I was clairvoyant and knew I needed a back up for the new TR7 FHC. I suppose I should give the reader an inkling of just what the thermostat looks like: 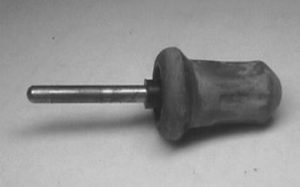 Cute little devil isn’t it? memorize this picture in your mind and look for them at swap meets!

Ha, I knew you’d be curious.

The below is an exploded parts lay out of the FASD, the below is what most TR7 owners want to do with it! 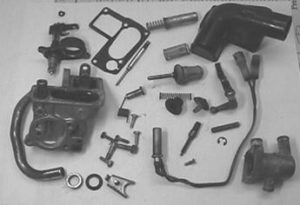